It looks like we’re starting to put the elevated inflation of the past two years behind us. Or are we?

No doubt, there are many signs that inflation is in retreat. Consumer price growth slowed for a sixth month in a row, making for a 6.5% gain over the last 12 months—a huge improvement over the 9.1% annual increases seen in June, the Bureau of Labor Statistics said Thursday. But could a second wave of inflation come back to haunt us, just when we think we are safe? It’s happened before, and one piece of economic data out this week suggested it’s possible—albeit unlikely—that it could happen again.

A second wave of inflation could be especially troublesome for consumers and the economy, given the historical record. The last time the U.S. experienced highly elevated inflation, in the 1970s through the early 1980s, price increases came in three waves—twice appearing to recede before bouncing back even worse, before finally subsiding.

If we are to endure a second wave of inflation, an early sign might come from the minds of ordinary people. Many economists believe inflation is a largely psychological phenomenon: if consumers believe prices are going to rise, they’ll behave in ways that make the belief a self-fulfilling prophecy. For instance, they might demand higher wages from their employers to make up for the inflation they expect, which could in turn cause businesses to raise prices.

That’s one reason the Federal Reserve Bank of New York tracks inflation expectations in its monthly Survey of Consumer Expectations. December’s survey figures showed a small uptick in how high consumers expect inflation to be in the long term: consumers asked to predict what the inflation rate would be in five years pegged it at an average of 2.42% in December, up from 2.32% when asked the same question in November.

Coghlan wondered whether increasing long-term expectations could be “setting up a bigger, harder inflationary wave to come in sort of three, four years time.”

“I will be keeping a careful eye on longer term inflation expectations,” Coghlan said.

Fed officials have also feared a “wage-price spiral” in which rising prices lead to rising wages, which lead to more rising prices in an out-of-control feedback loop. While wage increases have slowed down lately, easing fears of this phenomenon, Monday’s survey provided a reason to stay wary: households predicted a 4.6% year-over-year rise in income, the highest on record in data going back to 2013.

That could be a hint that inflation, while cooling off, could bottom out at around 4.6% rather than the 2% level the Fed is shooting for, Coghlan speculated.

The data doesn’t necessarily provide a clear signal, however. Josh Bivens, director of research at the Economic Policy Institute, a progressive think tank, said in an email that  the income expectations are “a real puzzle” in light of the fact that the same survey showed expectations for wages, which account for the majority of income, aren’t growing but have hovered around 3% for more than a year.

Inflation Rebound Would Be a Longshot

To be sure, inflation expectations are not yet elevated to the point where we should worry too much about it, said Ryan Sweet, chief U.S. economist at Oxford Economics.

There are other reasons to believe inflation, once it subsides, will stay down, Sweet said. For one thing, the economy is very different than it was in the 1970s and 1980s, and so is the Fed.

“The population was noticeably younger then,” he said. “A young population has a higher marginal propensity to consume, which pulls inflation higher. The population today is noticeably older. Also, the Fed didn’t appreciate or understand the importance of inflation expectations in the 70s/early 80s and this led to a wage-price spiral.” 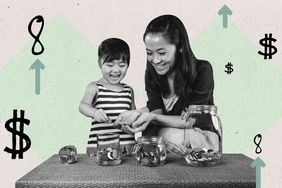