Unemployment Rate by Year Since 1929 Compared to Inflation and GDP

The unemployment rate is the percentage of unemployed workers in the labor force. It's a key indicator of the health of the country's economy. Unemployment typically rises during recessions and falls during periods of economic prosperity. The rate also declined during several U.S. wars, particularly during World War II. The unemployment rate rose during the recessions that followed those wars.

Here's how the unemployment rate has changed over time and how it's compared to gross domestic product (GDP) and inflation.

Unemployment tracks the business cycle. Recessions are part of that cycle and can cause high unemployment. Businesses often lay off workers and, without an income, those jobless workers have less money to spend. Lower consumer spending reduces business revenue, which forces companies to cut more payroll. This downward cycle can be devastating to individuals and the economy.

It may seem counterintuitive to think unemployment can get too low, but it can.

The Federal Reserve does not target specific figures for the natural rate of unemployment, but simply seeks "the maximum level of employment" as part of its long-term financial policy goals.

The unemployment rate is a lagging indicator. When an economy begins to improve after a recession, for example, the unemployment rate may continue to worsen for some time. Many companies hesitate to hire workers until they regain confidence in the recovery, and it may take several quarters of economic improvement before they feel confident that the recovery is real.

If you’re looking for work after a recession, you’ll likely find the going is still tough. It might take several months before the unemployment rate falls.

The ​U.S. Bureau of Labor Statistics (BLS) has measured unemployment since the stock market crash of 1929.

Gross domestic product (GDP) is the measure of economic output by a country. When the unemployment rate is high, there are fewer workers. That could lead to less economic output and a lower rate of GDP.

When inflation rises, the prices of goods and services go up, making them more expensive. If there is a high rate of unemployment at the same time, this could cause issues for those without an income since they may be struggling to afford basic necessities.

The following table shows how unemployment, GDP, and inflation have changed by year since 1929. Unless otherwise stated, the unemployment rate is for December of that year. Unemployment rates for the years 1929 through 1947 were calculated from a different BLS source due to current BLS data only going back to 1948. GDP is the annual rate and inflation is for December of that year and is the year-over-year rate.

How is the unemployment rate calculated?

The unemployment rate divides the number of unemployed workers by the total available workforce. In this equation, "unemployed workers" must be age 16 or older and must have been available to work full-time in the past four weeks. They must have actively looked for work during that time frame, as well, and temporarily laid-off workers don't count.

Which state has the highest unemployment rate?

As of March 2022, the District of Columbia and New Mexico had the highest unemployment rates among U.S. states, at 6.0% and 5.3%, respectively. Nebraska had the lowest rate of unemployment, at 2.0%. 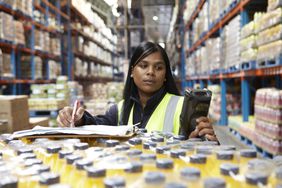 How Is the US Economy Doing?
U.S. GDP by Year, Compared to Recessions and Events