U.S. gross domestic product (GDP) by year is a good overview of economic growth in the United States. The table below presents the nation's GDP for each year since 1929, compared to major economic events.

The table begins with the stock market crash of 1929 and goes through the subsequent Great Depression. It includes five wars and several serious recessions. These extreme swings in the business cycle put today's economic climate in perspective. You can compare the GDP by year to fiscal and monetary policies to get a complete picture of what works and what doesn't in the U.S. economy.

The Bureau of Economic Analysis compiles the data. Keep in mind, when reviewing this history, that the BEA measures GDP in two ways: nominal GDP and real GDP.

Nominal GDP is the total U.S. economic output for that year. The BEA also calls it the "current-dollar GDP," since it's measured as a dollar amount, and it doesn't take factors like inflation into account. Experts use nominal GDP to compare economic output to U.S. debt, which is also measured in dollars without adjusting for inflation.

Real GDP accounts for inflation, making comparisons to previous years more accurate. The BEA uses it to calculate the GDP growth rate and GDP per capita. Real GDP is important because without canceling out the effects of inflation, the GDP could appear to grow, when really all that's happened is an increase in prices.

To calculate real GDP, the BEA starts with a reference year. The current base year is 2012. You'll notice that nominal and real GDP are the same in 2012. Real GDP shows what GDP would have been in each year if it were priced in 2012 dollars. That's how it removes the effect of inflation.

The current base year for GDP calculations is 2012. The period from which the weights for a measurement series are derived. The national income and product accounts (NIPAs) currently use the year 2000 as the base period. Rebasing changes the reference year (or base year) for the real (chained dollar and quantity index) estimates and price indexes and expresses GDP and other NIPA aggregates in terms of the prices of one year. The effect of rebasing is to produce chained-dollar estimates that are closer to additive for periods near the new base year. It is important to note that percentage changes based upon chain-type indexes are not affected by rebasing.

The following chart tracks both nominal and real GDP since 1929. Some historical events and government policies are added for context.

How is GDP measured?

GDP is the total of a country's personal consumption, business investment, government spending, and net exports (exports minus imports).

What is not included in GDP?

In the U.S., the Bureau of Economic Analysis excludes certain goods and services from GDP. For instance, the value of domestic services like parental care, though significant, is not included. Intermediate goods that are used to produce other goods are also not included. Goods that are produced and sold illegally on the underground market are excluded, as well.

What Is the U.S. GDP Growth Rate?
Historical US Unemployment Rate by Year 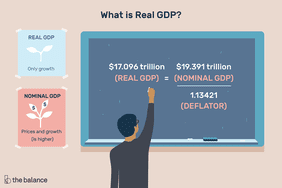